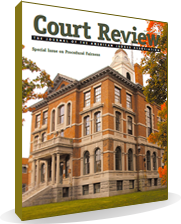 Procedural fairness (also referred to as procedural justice) is an evidence-based practice reliably associated with higher levels of compliance with and greater amounts of satisfaction with decisions by authority figures. Increasingly, national judicial organizations have recognized the importance of promoting procedural fairness. Recently, the Conference of Chief Justices and the Conference of State Court Administrators adopted a resolution encouraging state court leaders to promote the implementation of procedural fairness principles; a resolution in support of implementing clear communications and streamlined procedures in the courts; and a resolution encouraging leadership to promote equal justice.

We focus on helping judges and courts implement policies and practices that promote procedural fairness in courtrooms and courthouses. In addition, we look at policing, currently the focus of the majority of criminal justice research on procedural fairness, but we retain an emphasis on the courts.

We also seek to bridge the gap between academic research and actual practice. This site is a collaborative effort by judges, researchers, and university professors who share a belief that an emphasis on procedural fairness can make judges and court managers more effective decision makers, improve compliance with court orders, and increase public satisfaction with the court system. Yet we also share a desire to engage with one another—as well as a broader community—to test our ideas. So we provide a forum linking judges and court managers to the academic and research community engaged in the study of procedural fairness. 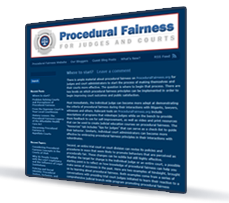 The Procedural Fairness Blog will offer a forum to discuss current issues and events through posts by founding participants, other staff from the National Center for State Courts, and periodic guest bloggers drawn from the judiciary, court management, and the academy.