From the plea bargaining process to the imposition of sentences, adherence to procedural fairness principles have been shown to promote defendants’ acceptance of sentences and judicial authority.

Incorporating The Procedural Justice Model Into Federal Sentencing Jurisprudence In The Aftermath of United States v. Booker: Establishing United States Sentencing Courts (abstract only)
Adam Lamparello, 4 N. Y. U. J. of L. & Liberty 112 (2009)
Adam Lamparello discusses the role of procedural fairness in the sentencing process, arguing that the federal sentencing guidelines should play a reduced role in determining sentencing, and that sentencing courts be created that would be closely situated to defendants. “With freedom from mechanically applying the Guidelines, the courts will be able to exercise their voices and exercise discretion in a purposeful and meaningful way. Individuals will be accorded validation and respect in a Guidelines-free hearing.” 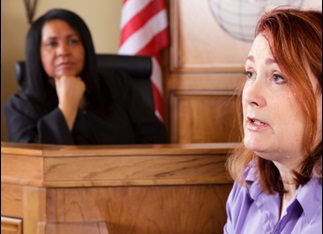 The Machinery of Criminal Justice
Stephanos Bibas, Introduction, The Machinery of Criminal Justice (2012)
This book introduction highlights how including the voices of all appropriate stakeholders in sentencing and other related phases such as victim-offender mediations and plea colloquies can lead to increased respect and compliance with the law, especially post release.

Plea Bargaining and Procedural Justice
Michael O’Hear, 42 Ga. L. Rev. 407 (2008)
This article considers the defendant’s voice prior to the sentencing phase by looking at procedural fairness principles in the context of plea bargaining.

Several other articles, while not available for free online, explore the importance of procedural fairness principles in sentencing. In “Turning Rat and Doing Time for Uncharged, Dismissed, or Acquitted Crimes: Do the Federal Sentencing Guidelines Promote Respect for the Law,” Keri Gould undertakes a holistic examination regarding the extent to which federal sentencing guidelines promote respect for the law. Michael Tonry also analyzes procedural fairness as a function of sentencing in his article, “Purposes and Functions of Sentencing” and Adam Lamparello’s article “Social Psychology, Legitimacy, and the Ethical Foundations of Judgment: Importing the Procedural Justice Model to Federal Sentencing Jurisprudence” discusses how the foundations and policy reasoning behind sentencing can be better achieved through an approach that focuses on procedural fairness principles.